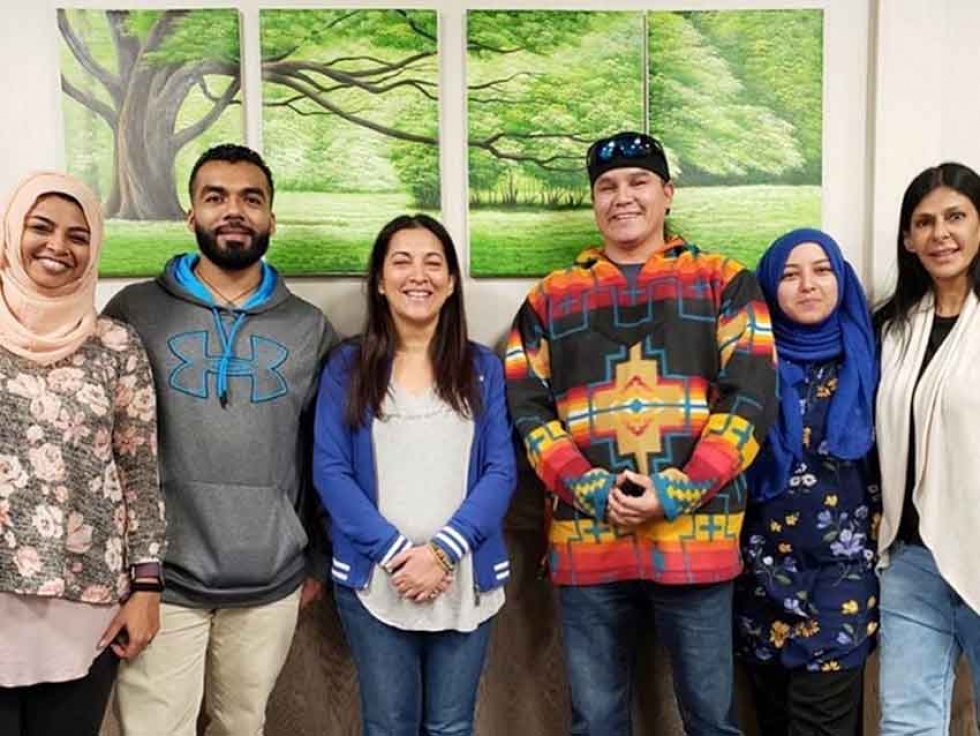 Healers Beyond Borders visit to Grassy Narrows. Mehreen Nasser is second from the right in blue. To her right is Jason Fobister of the Grassy Narrows First Nation. @wearehealersbeyondborders
24
Mar
2020

Why Some Muslims Are Engaging with New Age Spirituality: Interview with Muslim Practitioners of Energy Healing

“There was so much grief, pain, and loss of identity,” Mehreen Nasser recalls when she first embarked on a healing journey with the Grassy Narrows First Nation community, a community that resides near the border between Ontario and Manitoba.

Nasser identifies herself as a life coach and healer who works with people who seek to overcome challenges in different domains in their lives, ranging from career and finance to relationships and health.

Life coaching is an up and coming profession in which a coach helps clients achieve their personal and professional goals, find a higher purpose, and overcome blocks in their lives, such as harmful habits, behaviours or thought patterns that prevent them from becoming their “best selves” and attaining success, however they choose to define it.

It is often combined with energy healing, an alternative form of therapy that works with the underlying belief that everything around us, humans and objects alike, carries energy; this energy can be harnessed or manipulated to produce favourable results on our bodies and in our lives, affecting us physically, mentally and spiritually.

Life coaching and energy healing have become increasingly popular in recent years, in part due to social media influencers like Jay Shetty and Dr. Joe Dispenza, who have made self-growth, personal development, and spirituality a contemporary phenomenon widely available via social media.

When used together, life coaching and energy healing are supposed to help clients live holistically healthier and happier lives.

“I was going through a time where I was really trying to dig within to find my true self beyond cultural and social beliefs. I could see that medicines and therapy or counseling weren’t the only way for emotional healing, which transcends into physical ailments.”

Her pursuit of healing brought her to reiki, an ancient Japanese technique in which practitioners use their hands to manipulate the energy or “ki” of clients’ bodies, presumably by raising the frequency, or vibration, of one’s energy. In doing so, reiki claims to produce benefits ranging from pain relief, relaxation and stress reduction to improving emotional and mental well-being. Reiki is often offered to clients alongside other alternative therapy modalities such as acupuncture and yoga, and is also offered in some hospitals across North America (1). Some reiki practitioners make use of crystals and stones, such as amethyst and carnelian. These are thought to mediate the flow of energy in one’s body by repelling negative energy and attracting positive energy.

Although the science supporting the claims of various types of energy healing is often lacking or a source of controversy, there are organizations based in Canada that offer certification in various forms of energy healing.

Nasser is a certified Reiki practitioner, having completed Reiki course levels 1, 2 and Master level through the Sunstone Centre. Her life coaching career began informally and organically through healing and her personal life experiences.

In 2019, she was introduced by a friend and fellow healer to Jason Fobister, a member of the Grassy Narrows First Nation community. Fobister, who was impressed by their healing work, invited them to work in his community in the fall of 2019. The Grassy Narrows community’s water system was contaminated by mercury dumped by a paper mill into an upstream water system almost 50 years ago, with little government action. The heavy metal toxins have the potential to be passed on to future generations. Some estimates suggest that 90% of the population suffers from mercury poisoning, ranging from cognitive impairments to hearing loss and emotional difficulties. (2)

“The experience at first was extremely overwhelming -- the way they are living, the contaminated water, the high suicide rate,” Nasser recalls.

Nasser and her team worked with adults and children alike on several issues they faced, including addiction and lack of self worth. She notes that they saw profound transformations through several healing sessions, and received many messages of gratitude for their work.

“It was and still is extremely humbling and gratifying that we could be of service to these amazing people.”

Along with her team, Nasser established Healers Beyond Borders, an organization that aims to empower communities through energy healing, on the basis that this work transcends religious beliefs.

Nasser notes that the demand is a function of modern day society.

“People are living a full life, but still there is emptiness inside. There is a lack of belonging. We can’t keep going without connection, with ourselves, with others and with God himself. That is why people are soul searching, because they can feel there is more to life than what we have learned and experienced,” she explains.

Alternative therapies like energy healing have had their share of skepticism in the medical world, and have been dismissed by many as pseudoscience. Currently, there is limited research on these therapies, and when benefits are seen, many, although not all studies, attribute it to the placebo effect (3). Nevertheless, according to one statistic using government data, alternative or “complementary” therapies such as reiki, yoga, and acupuncture, are used by more than 70 percent of Canadians (4). Today, it is being increasingly explored through the Islamic lens by contemporary Muslims like Nasser, who are seeking a level of spirituality that goes beyond the rituals of religion that they have grown up with.

With the increasing hype surrounding this "new-age" spirituality, are Islamic principles being overlooked or eroded? Are such practices in line with Islamic values?

Kulsoom Jaffer, who also identifies as a life coach and healer, and who, like Nasser, identifies strongly with the Islamic faith, claims that a lot of this work is, in fact, based in Islam.

“There is a universal energy and you’re trying to use that… The energy is God,” she explains.

Jaffer first entered the healing world through theta healing and received her healing certifications through Theta Healing Canada and Eden Energy Medicine. Theta healing is another energy healing modality (type) in which clients attempt to change their brainwaves to the theta stage (4-7 Hz) through meditation. Theta waves are slow waves that are seen between sleep and wakefulness states, as well as in REM sleep; they have been linked to learning and memory, as well as brain plasticity (5). This method allows clients to tap into and tackle unhelpful conscious and subconscious beliefs picked up through life experiences, especially in childhood.

Jaffer condenses coaching and healing work to one common core: consciousness, or becoming aware of your thoughts, and creating an intentional life. This, she believes, is the bridge towards discovering problematic beliefs that cause us to fall into a cycle of problematic behaviours or emotional reactions to situations around us.

“Healing is when you surrender and are in the present moment,” she explains.

To surrender, or submit, is the fundamental basis and literal translation of the Arabic word “Islam”.

Jaffer compares the salat, or the daily prayer as prescribed in Islam, to meditation, a key practice in consciousness.

“You know when you rush through your prayer? Imagine rushing through meditation. If I understood it for what it was, I would never want to rush,” Jaffer says. “[Knowing] the benefits of meditation, that’s all I want to do! Because I know how it’s affecting my outer reality and my inner world. So why wouldn’t I enjoy it?”

Jaffer goes on to explain that salat al layl, or the night prayer, which is a highly recommended prayer, is performed in the middle of the night, often around 4:00 am. This is thought to be the best time to meditate, as the pineal gland produces the chemical metabolites for melatonin in the night between 1:00 and 4:00 am. Meditation during this time has been linked to increased levels of happiness, reduced stress, and improved energy. (5)

Tahera Kassamali, religious advisor for women in the Jaffari Community Centre, acknowledges the usefulness of life coaching and healing when done with a “God-centred focus”.

“Islam emphasizes self knowledge and self development with the aim of improving the self. That is part of fulfilling the responsibility of life on earth,” Kassamali says.

She notes that religious teachings serve a similar purpose as life coaching and healing work in teaching its followers to become better people and lead more fulfilled lives.

However, Jaffer notes that a big pitfall in the way Islam’s rituals are taught stems from people’s limited understanding of its principles. She notes that the new healing movement has become popular in recent years because it is re-teaching Islamic principles through a lens of love instead of fear.

“We were taught it [Islam] through guilt… No one is going to say you’re going to hell if you don’t meditate properly. I’m not meditating for God. I’m doing it for myself. Now I want to get up at 4:00 am, not because it’s a rule and Muslims have to do it. It’s good for you.”

Through her coaching and healing journey, Jaffer has learned that the onus of healing is placed on the individual rather than on any external source. She recalls a narration by Imam Ali, a central historical and spiritual leader of the Muslim world after the passing of the Prophet Muhammad (peace be upon him):

To Jaffer, her life coaching and healing work have helped her get back to the essence of Islamic rituals. “We should embrace it and not be threatened by it,” she comments.

“For me, that’s what it has done. It has helped me re-connect to Islam.”

Zehra Kamani is a freelance writer based in Toronto.